May 21, 2016
I found the answer to that question!  John sold all his property in Virgina in 1760 and disappears from  available records in Virginia until 1774.  He is found in May 1760 back in Dublin, Ireland in the Freemasons register.  He is listed in 4 places.  He is last listed on the register in 1768.  I found the source on Ancestry.com.  The Caperton name is found near Carrickfergus on a map of impounding reservoirs.  It was called a Townland. John had joined the Dragoons upon returning to Ireland because Carrickfergus was being threatened by The French and he needed to volunteer to protect his land.  I read some history of the Ulsters and it totally fits with what John did.  I think that once that conflict was settled, the War in the Americas was starting with England and he went back to volunteer in that effort in Virginia. I will be putting together my references and try to figure out how to link them here.https://books.google.com/books?id=5pLRAAAAMAAJ&pg=PA103&lpg=PA103&dq=uls
1 comment
Read more

John Caperton in Exeter in 1477 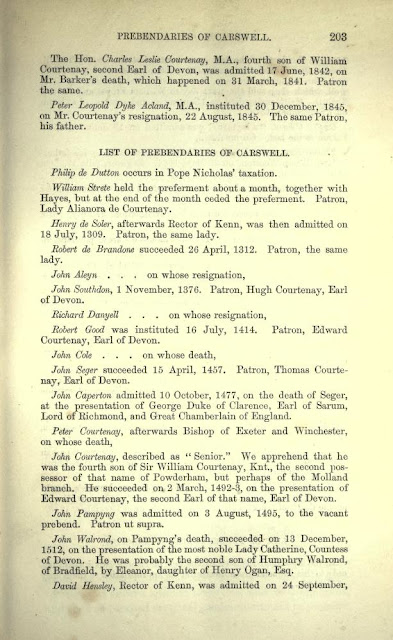 This is a page from the book "The History of the City of Exeter".  John Caperton is admitted as a prebender in the year 1477 in Carswell, Devon, England. A  prebendary  is a senior member of clergy, normally supported by the revenues from an estate or parish. The holder of the post is connected to an  Anglican  or  Roman Catholic   cathedral  or  collegiate church . The position is a type of  canon  who has a role in the administration of a cathedral. A  prebend  is the form of  benefice  held by a prebendary: historically, the  stipend  attached to it was usually drawn from specific sources in the income of a cathedral's estates. When attending cathedral services, prebendaries sit in particular seats, usually at the back of the  choir  stalls, known as  prebendal stalls . Abbots Carswell or Kerswell ABBOTS CARSWELL or KERSWELL, in the hundred of Haytor, and in the deanery of Ipplepen, lies about two miles from Newton Abbot. The manor, which belonged formerly
Post a Comment
Read more

July 25, 2018
Capleton is not a name change from Caperton.  There were Capleton families in Wells, England at the same time as Richard, Thomas and John were living in Wells.  Capletons carried on after 1835 in Wells, Capertons moved on somewhere;  to maybe Scotland,  America and other parts of England.
Post a Comment
Read more 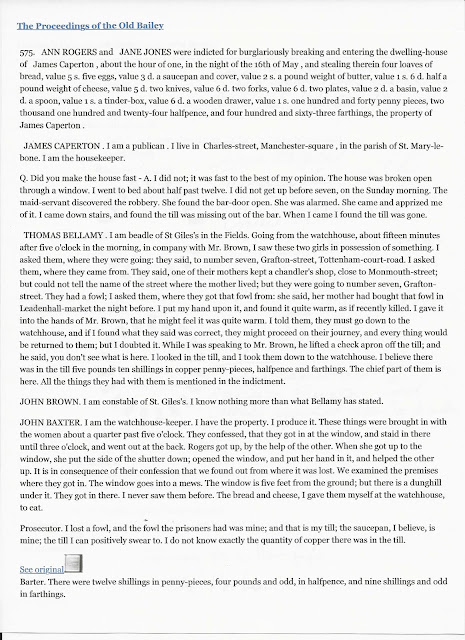 Today..July 18, 2018…it is hot in Anderson where I live so I entertain myself with genealogy.  I found a Court Proceedings of the Old Bailey…London’s Central Criminal Court, 1674 to 1913,  for James Caperton as the victim of a crime on May 16, 1812.  So naturally I looked it up and couldn’t attach it here so I printed it and will try to do it another way.  The essence of the crime was Ann Rogers age 15 and Jane Jones age 17 broke into James' business.  At least it sounds like a business, a bar, and took food, cooking utensils, and the till, the money drawer.  They also killed someones chicken.  They were hungry! They were convicted of the crime and given the sentence of death!  for a chicken!  Death….unbelievable!  Then some witnesses asked for mercy because of good character, no they were not pregnant.  They received mercy and got life in prison instead.  still unbelievable!  This was on July 1, 1812   In October 1812, they were both transported on the ship called Emu With 40 conv
Post a Comment
Read more

John Caperton in the Light Dragoons in 1764

May 28, 2016
The Grand Lodge of Freemasons of Ireland All Ireland, Grand Lodge of Freemasons of Ireland Membership Registers, 1733-1923 results for Caperton Results 1–4 of 4 John Caperton 19 May 1768 John Caperton 10 Sep 1764 Droghedas Light Dragoons 388 John Caperton 19 May 1768 John Caperton 10 Sep 1764  Warrant for Drogheda's Light Dragoons A regiment of Light Dragoons was raised in Ireland in 1759 by the Marquis of Drogheda, and numbered 19th.  It was changed to 18th in 1763 at the end of the Seven Years War.  Two warrants were granted to this Regiment,  December 2, 1762, 388 to the first squadron and 389 to the second.  The first registered 41 members up to 1791. and was canceled in 1813.  This was the regiment of John Caperton.  The source of this is Irish Masonic History and the Jewels of Irish Freemasonry. This regiment, 388, was enlisted to fight the Whiteboys who were a secret Irish agrarian organization in 18th century Ireland which used violent tactics to defend tenant fa
Post a Comment
Read more

May 28, 2016
As I am looking at the family of John,  there are 3 children born in Virginia from 1760 to 1770.  I have also read that there were many ships running back and forth to Ireland from the Americas and that hopping a ship was no problem for those that had business there.  So was John traveling back and forth with products importing and exporting? It might make more sense than bringing your family back and forth.  Just when you think you know something....there are more questions than answers.
Post a Comment
Read more

Caperton is found near Carrickfergus, Ireland as a name of a Townland in 1639. 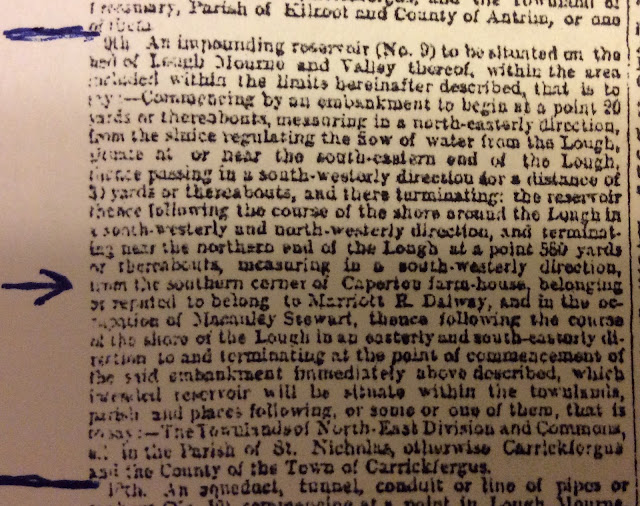 This is a description of the location of an impounding reservoir for the Belfast Water District in Ireland.  It is from the Parliamentry Notices in the Freemans Journal Nov. 15, 1873 that are describing the legal locations of all the places. I think that this proves that there were Capertons in Ireland by 1639 because the other newspaper articles regarding this same description give the existence of Caperton Townland as being since 1639.  In this description it calls it the Caperton farm house belonging or reputed to belong to Marriott R. Dalway and in the occupation of Macauley Stewart in the year 1873.
Post a Comment
Read more
More posts